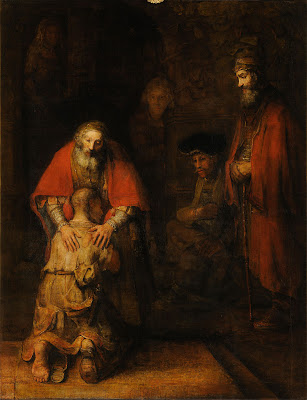 We should celebrate and rejoice because your brother here was dead and has come to life; he was lost and is found.

When we say that we have lost something, it can mean that we are deprived of what we possessed before, like our car keys, for instance. We can also lose weight. When someone wins, it implies that others lose; Germany lost the War; we can lose a fight or a race or a football game. Often it means being deprived of someone or something to which we are very much attached, like a wife, a husband, a son or daughter, a boy or girlfriend.

The Gospel of St Luke today shows us Jesus eating and drinking among tax collectors and sinners, among those who were rejected by society; their way of life, their behaviour had put them in the wrong. They were considered lost and were cut off from their roots. However, Jesus has something in mind. In order to help people to make sense of his attitude and actions towards these people, he tells three parables. First, there is the parable of the lost sheep, then that of the lost coin, and finally that of the lost son.  As we see in these three stories, a great joy comes when what was lost is found.

However, the stories are not about that which was lost but about the person who loses them: a shepherd, a woman and a father. The shepherd and the woman search with enthusiasm, energy and spirit till they finally find what they are looking for. Well, let us concentrate on the well-known story about the so called “prodigal son” because, unlike an animal or a coin, a son, as a human being, is closer to ourselves. Rather than focusing on the figure of the son, we need to focus on the human relationship, not only of the father with the younger son, but his relationship with the other son as well.

At the centre of this parable is the great concern and affection of the father, his readiness to forgive and to welcome his son back home. He is not happy because he found his lost son, but because his son found himself. After squandering all he had, after rejecting any family attachment, the son had to suffer the consequences of his actions. He thought he had achieved autonomy and independence in his desire to be a real man; and, at first, thought that it was necessary to leave his father's house to achieve maturity, but what he discovered was failure and nothingness, a poor life of selfishness and vanity, devoid of any meaning or joy. Moreover, by breaking off relations with his father and his family in order to follow his own desires, he had committed sin.

The story tells us that he came to his senses and decided to return to his Father's house. This illustrates what it means to be a repentant Christian: God is inviting him back home.

In the first reading Moses reminds God of the covenant he made with Abraham, Isaac and Jacob.  The people of Israel are invited to return to God and to love him as they did long ago. The second reading shows God calling Paul to his service. Paul himself recognized how God was patient and merciful to him.  Certainly God is like that. He calls and He remembers, but he asks us now to remember as well and to come back home.

In the parable, the Father was moved with pity and ran towards his son whom he saw from afar.  God is all the time calling us home. God has the same attitude to the other brother who was angry, resenting his Father’s overabundant love and mercy for his younger son. In his anger, he also became lost and he cut himself off from the joy and happiness of his father's household. He became an alien in his own home. It says that the father “came out” to plead with him. He needed to come back home as well, remembering what his loving father said to him: “My son, you are with me always and all I have is yours.” The father did not give up inviting him because he wanted to have the two children united with him as one family.  Such is the love God shows us. He never gives up, even if we frequently give up seeking him in our daily lives, committing many infidelities and with many failings. However, God is persistent and, all the time, he wants to show his mercy and love to us.  Rather than giving us what we deserve, God shows compassion towards us, towards you and me; and also towards the older brother who is behaving badly.

This is what God is asking us today: to come home once again. It is not enough just to enjoy the banquet prepared by God all by ourselves, but we are asked to invite our brother who remains wilfully outside: we are all invited to this happy and joyful celebration. We are to be drawn, called and brought into unity. The state of our Christian family is marked by our enthusiasm for the sons’ return. We are given the task to call all others who ignore how much God loves them. As we begin this Home Mission Sunday for the Church in England and Wales, let us pray and support the work of evangelization of the people of God, our brothers and sisters in Christ who, for different reasons or situations have drifted away from the practice of their faith and don’t come to church frequently, those who feel estranged, who don’t feel at home. Let us announce to them the Good News, how important they are to God and how much-loved they are as members of Christ's body. Let us not be content with mere words: more important, let us show them by our example.
Posted by Unknown