Chora is beautiful and transport us to an ancient time of the Byzantine art and religiosity. The wonderful and stunning frescoes and mosaics here make us to taste from this historic place a glimpse of the heavenly world. The various Mother. Mary and Jesus Christ paintings are gorgeous and really give the sense of true art and reverence. 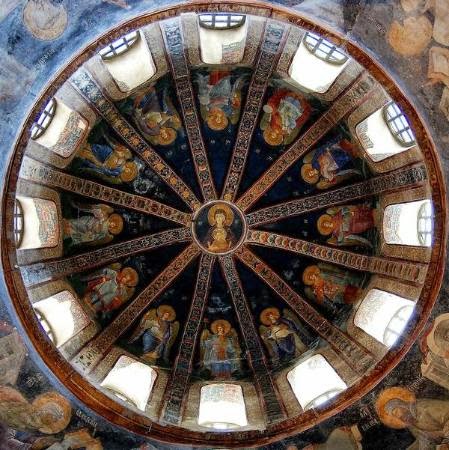 The Chora Museum (Turkish Kariye Müzesi, Kariye Camii, or Kariye Kilisesi — the Chora Museum, Mosque or Church) is considered to be one of the most beautiful examples of a Byzantine church. The church is situated in the western, Edirnekapı district of Istanbul. In the 16th century, the church was converted into a mosque by the Ottoman rulers, and it became a secularised museum in 1948. The interior of the building is covered with fine mosaics and frescoes.

History of Chora Church
The Chora Church was originally built outside the walls of Constantinople, to the south of the Golden Horn. Literally translated, the church’s full name was the Church of the Holy Saviour in the Country: although “The Church of the Holy Redeemer in the Fields” would be a more natural rendering of the name in English. (Greek ἡ Ἐκκλησία του Ἅγιου Σωτῆρος ἐν τῃ Χώρᾳ, hē Ekklēsia tou Hagiou Sōtēros en tē Chōra). The last part of that name, Chora, referring to its location originally outside of the walls, became the shortened name of the church. The original church on this site was built in the early 5th century, and stood outside of the 4th century walls of Constantine the Great. However, when Theodosius II built his formidable land walls in 413–414, the church became incorporated within the city’s defences, but retained the name Chora. The name must have carried symbolic meaning, as the mosaics in the narthex describe Christ as the Land of the Living (ἡ Χώρα των ζώντων, hē Chōra tōn zōntōn) and Mary, the Mother of Jesus, as the Container of the Uncontainable (ἡ Χώρα του Ἀχώρητου, hē Chōra tou Achōrētou).

The majority of the fabric of the current building dates from 1077–1081, when Maria Dukaina, the mother-in-law of Alexius I Comnenus, rebuilt the Chora Church as an inscribed cross or quincunx: a popular architectural style of the time. Early in the 12th century, the church suffered a partial collapse, perhaps due to an earthquake. The church was rebuilt by Isaac Comnenus, Alexius’s third son. However, it was only after the third phase of building, two centuries after, that the church as it stands today was completed. The powerful Byzantine statesman Theodore Metochites endowed the church with much of its fine mosaics and frescos. Theodore’s impressive decoration of the interior was carried out between 1315 and 1321. The mosaic-work is the finest example of the Palaeologian Renaissance. The artists remain unknown. In 1328, Theodore was sent into exile by the usurper Andronicus III Palaeologus. However, he was allowed to return to the city two years later, and lived out the last two years of his life as a monk in his Chora Church.

During the last siege of Constantinople in 1453, the Icon of the Theotokos Hodegetria, considered the protector of the City, was brought to Chora in order to assist the defenders against the assault of the Ottomans.

Around fifty years after the fall of the city to the Ottomans, Atık Ali Paşa, the Grand Vizier of Sultan Bayezid II, ordered the Chora Church to be converted into a mosque — Kariye Camii. Due to the prohibition against iconic images in Islam, the mosaics and frescoes were covered behind a layer of plaster. This and frequent earthquakes in the region have taken their toll on the artwork.

In 1948, Thomas Whittemore and Paul A. Underwood, from the Byzantine Institute of America and the Dumbarton Oaks Center for Byzantine Studies, sponsored a programme of restoration. From that time on, the building ceased to be a functioning mosque. In 1958, it was opened to the public as a museum — Kariye Müzesi. 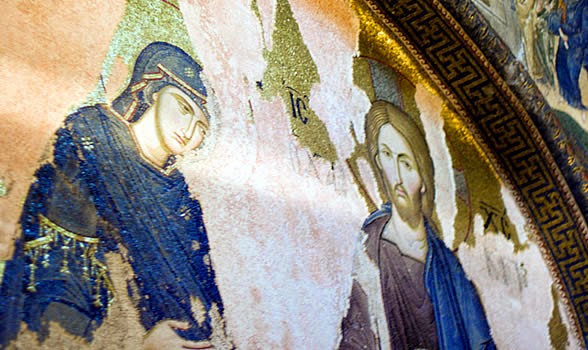 Interior of Chora Church
The Chora Church is not as large as some of the other Byzantine churches of Istanbul (it covers 742.5 m²), but what it lacks in size, it makes up for in the beauty of its interior. The building divides into three main areas: the entrance hall or narthex, the main body of the church or naos, and the side chapel or parecclesion. The building has six domes: two in the esonarthex, one in the parecclesion and three in the naos.aa

The Deisis, Supplication, Mother of God.

The Deisis, Supplication, Mother of God. Walk through the door of the Chora Monastery Museum and you step back in time. One-thousand-four-hundred-seventy-three years, to be exact, when Chora was one the many beautiful churches that adorned Constantinople, the jewel in Byzantium’s crown. 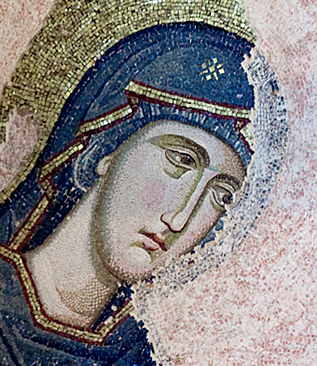 When it was built, Chora was outside the Walls of Constantine, and so, today, is a bit off the beaten path — away from the long tourist magnets that are Hagia Sophia, the Blue Mosque, and Topkapi Palace.

“Chora,” in Greek, means “rural,” or “in the country,” and the monastery kept that name after it was incorporated within the enlarged Theodosian Walls.

But the name “Chora,” also alludes to another, everlasting, realm: “I Chóra Ton Zónton,” The World of The Living,” proclaims an icon of Christ above the nave door. It’s one of the few mosaics that did not sustain damage during Fourth Crusade 1204 sack of Constantinople.

Evidence of this destruction — and that caused by the passage of 14 centuries — is seen in the bare walls and domes that once were filled with priceless mosaics.

Next to Christ Pantocrator.” (“He Who Holds All,” The Lord of the Universe.) That’s Theódoros Metochites, the man who restored Chora after the Latin invasion.

“Metochitis, a Byzantine poet, scientist, and minister of the treasury, kneels before the enthroned Christ, holding in his hands the restored Chora church.”

Icon of Christ of Chalke, the Bronze Gate of the Great Palace 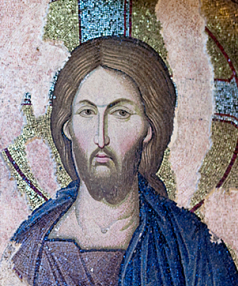 The greatest church in Christendom before St. Peter’s was constructed in Rome 1,000 years later, Hagia Sophia is the very symbol of Byzantium and occupies a special place in the Greek Orthodox heart.

But you don’t have to be Greek to appreciate its beauty and history — as Atatürk, the Father of modern Turkey, did in 1935 when he proclaimed Hagia Sophia a museum. Hagia Sophia’s Deisis (Supplication) mosaic, qualifies it as a World Heritage Site.

The Mother of God, a Chora dome mosaic

The virgin, clad in a blue chiton, reclines on a purple cushion by a cave housing the manger. The ox and the ass look on as divine light bathes the Child.

To the left of the cave appear angels, and to the right another angelic messenger gives the Good News to the shepherds residing in the fields.

The Nativity is just one of the beautiful scenes from the lives of Christ and the Virgin found in Chora. You could teach a whole Bible class just by walking around and pointing at the mosaics in this beautiful church: besides The Nativity, there are, The Presentation of the Virgin to the Temple, The Annunciation, The Flight into Egypt, The Miracle at Cana, Christ Healing the Leper, The Samaritan Woman at the Well, Christ Healing the Blind Man, Christ Healing the Paralytic, The Temptation of Christ, The Resurrection, treasures all.
The mosaic just below the dome of The Genealogy of Christ, a depiction of the Virgin Mary with Christ of the Chalke, especially moving. Named for an icon of Christ that hung above the Chalke, the “Bronze” Gate, the main ceremonial gate to the Great Palace. Reminiscent of the more famous Hagia Sophia Deisis Christ, this is the face of a benevolent God.

With Avar armies at the gates, those prayers were answered, and Patriarch and people gathered in Hagia Sophia to offer thanksgiving to the Mother of God for The City’s deliverance. (The City, I Polis, as Constantinople was known, is found in the name of Turkey’s largest city and artistic and cultural capital: Is Tin Polin, To The City — Istanbul.) 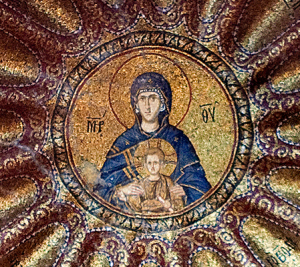 In thanksgiving was written a beautiful long hymn, Ti Ypermáho, “To the Invincible General.” After a millenium-and-a-half it is still being sung in Orthodox churches for five consecutive Friday evenings before Easter Sunday. An Orthodx hymn that accompanies our Chora video, who’s beloved melody is dear to my soul. Hearing it now brings back Constantinople’s fateful history and The City’s special place in the Greek psyche. A hymn that I find myself humming in front of the Chora mosaic icon of the Mother of God:

“To Thee, Invincible General, I ascribe the victory/Having been delivered from suffering, Your City offers thanksgiving/to You O Mother of God./And having your might unassailable/Free us from all dangers/So we may cry unto you/Hail O Bride Unwedded.”