The Shroud of Turin

The Shroud of Turin is the most analysed artefact in the world, yet remains the world's greatest unsolved mystery. Could it be the actual burial cloth that wrapped the historical Jesus or is it nothing more than a medieval hoax?  For centuries, scientists and historians, artists and believers have pored over the mysterious Shroud of Turin.

Here you will find a comment of a new discovery made in Italy, It is followed by an excellent video produced by BBC. In addition, there is a link from "The Vatican Insider" on technological advances in approaching the Holy Linen.  Finally, four videos on the history of the Shroud. 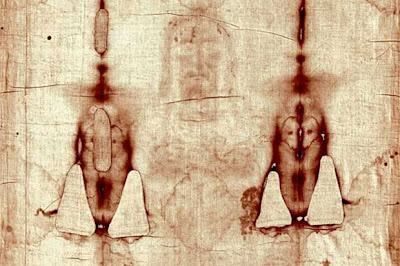 New scientific tests on the Shroud of Turin, which went on display Saturday (March 30) in a special TV appearance introduced by the pope, date the cloth to ancient times, challenging earlier experiments that dated it only to the Middle Ages.

Pope Francis sent a special video message to the televised event in the Cathedral of Saint John the Baptist in Turin, Italy, which coincided with Holy Saturday, when Catholics mark the period between Christ’s crucifixion on Good Friday and his resurrection on Easter Sunday.

The Vatican, tiptoeing carefully, has never claimed that the 14-foot linen cloth was used to cover Christ after he was taken from the cross 2,000 years ago, as some believers claim.

Francis, reflecting that careful Vatican policy, on Saturday called the cloth, which is kept in a climate-controlled case, an “icon” — not a relic.

But Archbishop Cesare Nosiglia of Turin, the “pontifical custodian of the shroud,” said the special display on Holy Saturday “means that it represents a very important testimony to the Passion and the resurrection of the Lord,” The Telegraph reported.

The burial shroud purports to show the imprint of the face and body of a bearded man. The image also purportedly shows nail wounds at the man’s wrist and pinpricks around his brow, consistent with the “crown of thorns” mockingly pressed onto Christ before his crucifixion.

Many experts have stood by a 1988 carbon-14 dating of scraps of the cloth carried out by labs in Oxford, Zurich and Arizona that dated it from 1260 to 1390 — well more than 1,000 years after the time of Christ.

The new test, by scientists at the University of Padua in northern Italy, used the same fibers from the 1988 tests but disputes the earlier findings. The new examination dates the shroud to between 300 B.C. and 400 A.D., which would put it in the era of Christ.

It determined that the earlier results may have been skewed by contamination from fibers used to repair the cloth when it was damaged by fire in the Middle Ages, the British newspaper reported. The cloth has been kept at the cathedral since 1578.

The new tests also supported earlier results claiming to have found traces of dust and pollen on that shroud that could only have come from the Holy Land.

The latest findings are contained in a new Italian-language book — “Il Mistero Della Sindone,” or “The Mystery of the Shroud,” by Giulio Fanti, a professor of mechanical and thermal measurement at the University of Padua, and journalist Saverio Gaeta.

Fanti, a Catholic, used infrared light and spectroscopy — the measurement of radiation intensity through wavelengths — in his test. He said the results are the outcome of 15 years of research.


New technologies at the service of faith, meditation and knowledge: a new App as an Evangelization tool aimed at approaching the Holy Linen in a multimedia manner, as of March 29.  VATICAN INSIDER, ROME