Iconoclasm in the Byzantine Empire 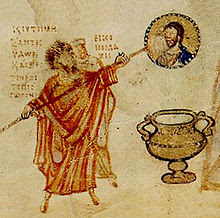 Iconoclasm is a phenomenon which has appeared several times through recorded history. It is characterized as being the intentional demolition of the religious icons, effigies, symbols or monuments of a society’s culture. This phenomenon appeared in the Byzantine Empire during the 8th and 9th centuries CE and caused great harm and civil strife to this once great empire. Since Constantine the Great’s Edict of Mediolanum, icons have been used in the Roman Empire to represent Jesus Christ or other important figures of Christianity. These icons were often presented on mosaics, which the Romans were particularly fond of.

Depiction of an iconoclast

The causes of iconoclasm in the Byzantine Empire are numerous and complex. The first Iconoclastic period of the Byzantine Empire, which took place between the years 730 and 787 CE was preceded by a notable increase in the use of icons to represent religious figures. One particular event that may have contributed to the emergence of the phenomenon was the fabrication of coins by the emperor Justinian II in 695 which were marked by an image of Jesus Christ. This was apparently not well received by many communities living in the Roman Empire and may have contributed to the rising animosity against icons. Some historians like Arnold J. Toynbee have put forward the theory that the extensive Muslim conquests of lands bordering the Byzantine Empire influenced the Byzantine authorities to embrace the Muslim’s destructive policy on idolatry.

During a period of marked iconoclasm, there are usually two positions on the subject. On one hand, there are the iconoclasts who are in favour of the iconoclasm and the iconodules, who are opposing it. The iconoclasts often viewed the icons as pagan idolatries and therefore wanted to remove that contradictory (to them) aspect of the Christian religion. They also believed that the icons might have been of a Nestorian nature because according to their view, these works of art could only depict one of the two natures of Jesus, either the human one or the divine one. If the icons portrayed the human side of Jesus, they were objects of the propagation of Nestorian Christianity as opposed to Nicene Christianity. Also, one of their main arguments was that the commandment “You shall not make for yourself an idol” forbade religious icons.

During the two outbreaks of iconoclasm that affected the Byzantine Empire (730-787 & 814-842) the iconoclasts, who were leaded at first by the emperor Leo III the Isaurian, wanted the abolition and the destruction of icons for various reasons. The reason that has been often attributed to the emperor’s will of abolishing religious icons was that he believed that the very popular use of them caused military defeats at the hand of the Muslim forces and the terrible volcanic eruption of the island of Thera, which he attributed to God’s displease. Leo III’s successor, his son Constantine V, continued his father’s work and mobilized the Council of Hieria in 754, which discussed iconoclasm and advocated it. Constantine V’s successor was Leo IV who is most notoriously known because of his wife Irene’s secretive support of the iconodules during his reign. He took some measures against the icons but after his death, they were undone by his wife. The second period of iconoclasm was instigated by the emperor Leo V the Armenian who might have chosen this path to justify that the military disaster that took place before and under his reign were caused by the divine condemnation of icons. Leo’s successor was Michael II who validated the decisions that were made at the major council of 754.

On the other hand, the iconodules claimed that Christian religious icons were not idols for the reason that religious depictions of a different religion to Christianity were idols and Christian images were legitimate icons. The reasoning behind this argument was that icons, which were Christian images, illustrated genuine persons while idols depicted unreal identities since they were representing other gods, which were automatically unreal. Furthermore, for iconodules, icons were legitimate because they were portraying Jesus’ flesh. They confirmed that by affirming that the reincarnation of Jesus Christ, which proved that he was the incarnation of God, confirmed that the icons represented Jesus Christ, the second figure of Trinity and not God, the first figure of Trinity. Iconodules also claimed that the Emperor Leo III the Isaurian had no right to decide these canonical matters because that was the church’s role. Finally, one of their most considerable assertions was that Acheiropoieta, icons which had come into existence by the hand of God, made icons legitimate.

The iconodules were blessed by people of primary importance during both periods of iconoclasm. Leo III’s decisions were opposed by the Patriarch of Constantinople Germanus I and also by Pope Gregory III who proscribed them. Later on, the Patriarch Nikephoros of Constantinople would try to reverse the balance but with little effect. The most decisive iconodule of this first crisis was Irene, the wife of Leo IV and regent after his death. She had to hide her affinities toward icons during her husband’s reign and when she held the regency, she managed to end the First period of iconoclasm. The Second period of Iconoclasm was ended in a similar fashion by Theodora, the widow of emperor Theophilus and regent of the Roman Empire. She restored the icons in 843.

The two periods of iconoclasm greatly affected the Byzantine or Roman Empire’s relations with Rome. The tensions erupted at first during Leo III’s reign where his measures were directly defied by Pope Gegrory III. Leo III responded by occupying lands that were under the Pope’s authority (Calabria and parts of Sicily). The tensions that followed between Constantinople and Rome fuelled the popes to valorise the Frankish kingdom which was renamed “Empire of the Romans” under Charlemagne. The hostility and rivalry between Rome and Constantinople culminated in the Great Schism in 1054, when Pope Leo IX and Patriarch Michael I Cerularius of Constantinople excommunicated each other. The East-West Schism of 1054 had disastrous consequences on the Eastern Roman Empire as it permanently divided the Christian world between the Catholic and Orthodox churches. It also led partially to the Sack of Constantinople of 1204 (under a unified Christian world, this would probably not have happened) and to the ultimate fall of Constantinople at the hands of the Ottoman Turks, in 1453.

An interesting series of videos on the Byzantine Empire, including stories on images before and after the Iconoclasm.