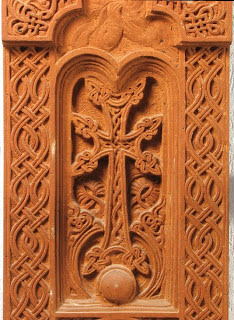 Armenians express their beliefs and characteristics through tangible and intangible creations that relate to their culture. The art of the Armenian people is a product of their history and world culture.

Folk art and culture play a great role in the identity of the Armenian people. Many Armenians explore the world surrounding them through symbols. The most important of these symbols include "The Sacred Mountain," "The World as a Garden," and "The Khachkar" (Armenian Cross-Stone).

"The Sacred Mountain," known as Mount Ararat, is usually linked with the resting place of Noah’s ark. Mount Ararat, which first belonged to the Republic country of Armenia, is now located in present-day Turkey.

Mount Ararat also symbolizes the struggles that Armenians went through in trying to keep their faith and unity. Although Armenians are physically separated from their sacred Ararat Mountain, they claimed to have never been too distant from it in spirit. The mountain appears before the eyes of those living in the capital of Armenia, Yerevan. This sight inspires many artisans and painters to constantly reproduce its image. For all intensive purposes, the mountain has become the "calling card" of Armenia.

"The World as a Garden" is another symbol for the identity of the Armenian culture. It portrays the vital culture in which Armenians cultivated grapes for the wine and raised cattle.

Many centuries before the Church of the Holy Cross was built at Lake Van, Armenians had read and learned about the Bible’s legend of the Garden of Eden. From this and many other biblical stories, Armenians believed to be somewhat connected to the holy lands described in Genesis 2:8-15.

Another symbol to the Armenian identity is "The Khachkar," which is a memorial stone unique to the country of Armenia. It is a rectangular block of stone that is carved into the Armenian cross. The portion of the stone in which the cross is engraved always faces the west.

Khachkars are found almost everywhere in Armenia, mostly by monasteries, crossroads, mountain ledges, springs and bridges. The design of the Armenian cross mirrors some of the designs preferred during the 4th century, which was around the time Christianity was first adopted by Armenians. The winged Armenian cross has a busy design with the lower part being slightly longer than the arms and the top of the cross. There are no two similar designs of the Armenian cross expect for the two unique wings.

Another important aspect of the Armenian culture is music and dance. The heritage of the Armenian dance is perceived to be one of the oldest and richest forms seen in the near east. Many rock statues and paintings of Armenian dancing remain from ancient times.

The music of Armenia is a very traditional one. Armenian music is mostly accompanied by musical instruments and is usually followed by the feasts and festivals being celebrated. In its recent years, Armenians have created new styles of music while staying true to old customs. This is supported in the present day by the world-class Armenian Philharmonic Orchestra, performing at the Opera House in the capital of Armenia, Yerevan.

It is the official language of the Republic of Armenia and Nagorno-Karabakh. The language is also spoken very commonly among Armenian communities in the Armenian Diaspora. The creation of the Armenian alphabet and continuance of this unique language have kept the Armenian public alive and strong, physically, emotionally and spiritually.

The Armenian people have overcome many obstacles throughout their history and continue to do so today; these challenging hindrances are evident in the cultural traditions. The Armenian people express their beliefs, histories, and lifestyles through the use of art, music, religion, architecture and books. These one of a kind expressions of culture exist within the core of the Armenian identity.