The History of the Mandylion of Edessa 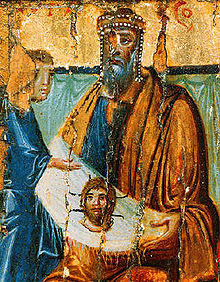 According to Iconographic Tradition, King Abgar of Edessa wrote a letter to Jesus, asking him to come and cure him of an illness. This story is found in the History of the Church (1.13.5-22) written by Eusebius of Caesarea who claimed that he had transcribed and translated the actual letter in the Syriac chancery documents of the king of Edessa. In this earliest account, Christ replies by letter, saying that when he had completed his earthly mission and ascended, he would send a disciple to heal Abgar. The image “not made by hands”, that Jesus sent  to cure the king, was known later to the Byzantines as the Mandylion (“holy towel”).

I present two interesting texts: the first one is an excellent account of the "History of the image of Edessa", written by Professor Sebastian Brock, Oxford University. You will find here a connection he makes between the mandylion and Adai and his disciple Mari, later related to the "Anafora Adai and Mari" http://www.jaas.org/edocs/v18n1/Sebastian%20Brock-mandili-Final.pdf
The second text, here below, is a quick account on the image of Edessa, its journey and a brief analysis of the icon. Enjoy!

The Image of Edessa Revealed, by Joe Nickell

The story of the Edessan Image is related in a mid-fourth-century Syriac manuscript, The Doctrine of Addai. It tells how King Abgar of Edessa (now Urfa in south-central Turkey), afflicted with leprosy, sent a messenger named Ananias to deliver a letter to Jesus requesting a cure. In the letter (according to a tenth-century report [qtd. in Wilson 1979, 272–290]), Abgar sends “greetings to Jesus the Savior who has come to light as a good physician in the city of Jerusalem” and who, he has heard, “can make the blind see, the lame walk . . . heal those who are tortured by chronic illnesses, and . . . raise the dead.” Abgar decided that Jesus either is God himself or the Son of God, and so he entreats Jesus to “come to me and cure me of my disease.” He notes that he has heard of the Jews’ plan to harm Jesus and adds, “I have a very small city, but it is stately and will be sufficient for us both to live in peace.”
Abgar, so the story goes, instructed Ananias that if he were unable to persuade Jesus to return with him to Edessa, he was to bring back a portrait instead. But while Ananias sat on a rock drawing the portrait, Jesus summoned him, divining his mission and the fact of the letter Ananias carried. After reading it, Jesus responded with a letter of his own, writing, “Blessed are you, Abgar, in that you believed in me without having actually seen me.” Jesus said that while he must fulfill his mission on earth, he would later send one of his disciples to cure Abgar’s suffering and to “also provide your city with a sufficient defense to keep all your enemies from taking it.” After entrusting the letter to Ananias, “The Savior then washed his face in water, wiped off the moisture that was left on the towel that was given to him, and in some divine and inexpressible manner had his own likeness impressed on it.” Jesus gave Ananias the towel to present to Abgar as “consolation” for his disease.
Quite a different version of the story (see Wilson 1979, 277–278) holds that the image was impressed with Jesus’ bloody sweat during his agony in the Garden of Gethsemane (Luke 22: 44). (This anticipates the still later tradition of Veronica’s Veil, wherein Veronica, a woman from Jerusalem, was so moved by Jesus’ struggling with his cross on the way to execution that she wiped his face on her veil or kerchief, thus imprinting it with his bloody sweat. Actually, the term veronica is simply a corruption of the Latin words vera iconica, “true images” [Nickell 2007, 71–76].) In this second version of the story, Jesus’ disciple Thomas held the cloth for safekeeping until Jesus ascended to heaven, whereupon it was then sent to King Abgar.

Significantly, the earliest mention of the Abgar/Jesus correspondence—an account of circa ad 325 by Bishop Eusebius—lacks any mention of the holy image (Nickell 1998, 45). Also, in one revealing fourth-century text of The Doctrine of Addai, the image is described not as of miraculous origin but merely as the work of Hannan (Ananias), who “took and painted a portrait of Jesus in choice paints, and brought it with him to his lord King Abgar” (qtd. in Wilson 1979, 130).
Historian Sir Steven Runciman has denounced all versions of the legend as apocryphal: “It is easy to show that the story of Abgar and Jesus as we now have it are untrue, that the letters contain phrases copied from the gospels and are framed according to the dictates of later theology” (qtd. in Sox 1978, 52).

Nevertheless, Runciman adds, “that does not necessarily invalidate the tradition on which the story was based ...” (qtd. in Sox 1978, 52). The best evidence in the case would be the image itself, but which image? There have been several, each claimed to be the miraculous original. Obviously, only one could be authentic, but does it even still exist?

The Mandylion has a gap in its provenance (or historical record) of several centuries. It was reportedly transferred in 944 to Constantinople, capital of the Byzantine Empire, along with the purported letter from Jesus to King Abgar. The image may once have been incorporated into a triptych of the tenth century. Its side panels, now reposing in the monastery of Saint Catherine on Mount Sinai, illustrate the pious legend of Abgar receiving the image. Interestingly, the panels portray Abgar as having the features of Byzantine Emperor Constantine VII Porphyrogenitos.

After the Venetians conquered Constantinople in 1204 during the Fourth Crusade, the Mandylion was reportedly transferred to the West, where its history becomes confused. Three traditions develop, each associated with a different “original” of the image:

These are the three Edessan Mandylions that have been claimed as original. Others—such as a seventeenth-century Mandylion icon in Buckingham Palace in London, surrounded by painted panels (Wilson 1979, 111)—need not concern us here.

The Vatican now concedes (in the words of the official Vatican Splendors exhibit catalog [“Mandylion” 2008]) that “... the Mandylion is no longer enveloped today by any legend of its origin as an image made without the intervention of human hands....”

In the summer of 1996, the Vatican Museum’s chemistry and painting restoration laboratory analyzed their Mandylion. It was taken out of its baroque reliquary and removed from its silver-sheet frame (made in 1623). Glued to a cedar support panel was the linen cloth on which the face of Christ was clearly “painted,” although the non-destructive tests were insufficient to specifically confirm that the painting medium was tempera.

While “the thin layer of pigment showed no traces of overpainting,” there were nonetheless “alterations in the execution of the nose, mouth, and eyes” that were “observed in the x-rays and thermographic and reflectographic photographs.” Specifically, the nose had once been shorter, “so that the image originally must have had a different physiognomy” (“Mandylion” 2008, 57–58).
The museums’ scholars learned (according to “Mandylion” 2008, 56):

The version in the Vatican and the one in Genoa are almost wholly identical in their representation, form, technique, and measurements. Indeed, they must at some point in their history have crossed paths, for the rivet holes that surround the Genoese image coincide with those that attach the Vatican Mandylion to the cut-out sheet of silver that frames the image. ... So this silver frame, or one like to it, must also have originally covered the panel in Genoa.

The Mandylion clearly has been copied and recopied, as if the different versions were just so many “icons” (as they are now called). It is not surprising that many of them appeared. According to Thomas Humber (1978, 92), “Soon the popular demand for more copies representing the ‘true likeness’ of Christ was such that selected artists were allowed or encouraged to make duplications.” Indeed, “there was, conveniently, another tradition supporting the copies: the Image could miraculously duplicate itself.”
Because icons were traditionally painted on wood, the fact that both the Vatican and Genoese Mandylions are on linen suggests that each was intended to be regarded as the original Edessan Image. That image was described in the tenth-century account as “a moist secretion without coloring or painter’s art,” an “impression” of Jesus’ face on “linen cloth” that—as is the way of legend—“eventually became indestructible” (qtd. in Wilson 1979, 273).

While the original image appears lost to history, Ian Wilson (1979, 119–121) goes so far as to argue that the Edessan Image has survived—indeed, that it is nothing less than the Shroud of Turin, the alleged burial cloth of Jesus! To the obvious rejoinder that the early Mandylions bore only a facial image whereas the Turin “shroud” bears full length frontal and dorsal images, Wilson argues that the latter may have been folded in such a way as to exhibit only the face. Also there is an eighth-century account of King Abgar receiving a cloth with the image of Jesus’ whole body (“Image” 2008). Unfortunately, the Turin cloth has no provenance prior to the mid-fourteenth century when—according to a later bishop’s report to the pope—an artist confessed it was his handiwork. Indeed, the image is rendered in red ocher and vermilion tempera paint—not as a positive image but as a negative one, as if it were a bodily imprint. Moreover, the cloth has been radiocarbon dated to the time of the forger’s confession (Nickell 1998). (Another image-bearing shroud—of Besançon, France—did not come from Constantinople in 1204 as alleged but was clearly a sixteenth-century copy of the Turin fake [Nickell 1998, 64].)

The evidence is lacking, therefore, that any of these figured cloths ever bore a “not-made-by-hands” image. Instead, they have evolved from unlikely legend to Edessan portrait to self-duplicating Mandylions to proliferating “Veronicas” to full-length body image—all supposedly of the living Jesus—and thence to imaged “shrouds” with simulated frontal and dorsal bodily imprints. Finally, modern science and scholarship have revealed the truth about these pious deceptions.