Here you will find a comment by Sandro Magister  about a series of broadcasts of a wonderful mosaics from the 12th century  at Monreale Cathedral, based on the Credo. The first of twelve episodes of “Il Credo nei mosaici di Monreale," will be published on Sunday, April 21. It will illustrate the first article of the profession of faith: “I believe in God, the Father almighty, creator of heaven and earth.” 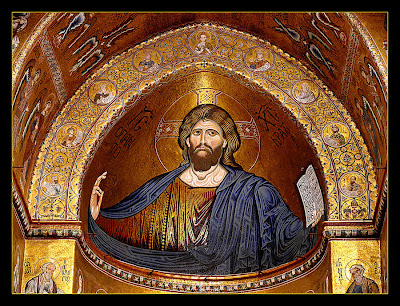 ROME, April 18, 2008 – In his last Wednesday general audiences, before renouncing the papacy, Benedict XVI had begun to explain the “Credo." His successor, Francis, has decided to continue the work.

The "Credo" is the first breath of the newborn Christian. It is all of a piece with Baptism, it is proclaimed at Sunday Mass, it is the identity card of the believer. “The faith is as we say in the Credo,” Pope Francis reiterated in a recent morning homily. The whole faith - he added - without subtractions, without reductions, without compromises.

This is the reason that - in this year of faith - induced TV 2000, the channel of the Italian episcopal conference, to put the “Credo” at the center of an original series of broadcasts, beginning on Sunday, April 21.

With the forms, the colors, the light of that masterpiece unique in the world which are the mosaics of the cathedral of Monreale, in Sicily.

In twelve episodes like the twelve apostles, Sunday after Sunday, each article of the “Credo” will be narrated and presented to the viewer from inside that very cathedral, illuminated by its wonderful mosaics from the 12th century.

The narrator will be Fr. Innocenzo Gargano, a Camaldolese monk, a master of the Sacred Scriptures and the Fathers of the Church. A narrator in the proper sense of the word. Because the “Credo” is not an arid list of dogmas. It is the living history of the action of God with men and for men. It is "historia salutis" with its summit in the Christ "Pantocrator" that dominates the apse of the cathedral of Monreale.

Step by step, from inside the cathedral, Fr. Innocenzo will unveil the “spirit” of the images and therefore of the sacred narration, following the outline of the articles of the “Credo.”

He will alternate with the art historian Sara Magister, who will illustrate the “letter,” the iconography of the same images, from the studios of TV 2000 in Rome.

One will thus embark upon an adventure without equal, from the first moments of creation to the coming of Jesus to the heavenly Jerusalem. An adventure revisited precisely in the place in which these same images become sacramental reality, when the Eucharist is celebrated on the altar.

More than eighty years ago the cathedral of Monreale was visited by Romano Guardini, an Italian-German theologian very dear to Joseph Ratzinger and Jorge Mario Bergoglio.

Guardini attended the rites of Holy Week in the packed church, and was struck by the attitude of the faithful:

"The women with their veils, the men with their cloaks around their shoulders. Everywhere could be seen distinguished faces and a serene bearing. Almost no one was reading, almost no one stooped over in private prayer. Everyone was watching intently, everyone was rapt in contemplation."

The director of TV 2000, Dino Boffo, said in presenting the new program:

"The believers who over the past nine centuries had the opportunity to turn their gaze upward and admire the mosaics of the cathedral of Monreale were for the most part illiterate, but not for this reason fatally destined to remain in ignorance. The nourishment of the faith came through the charm of the beautiful, of the majestic. ' One day we will look upon that beautiful face of the Risen One,' Pope Francis said to the cardinals who had just elected him. And so, one foretaste of that unfathomable beauty is precisely in the vault of the apse of Monreale, where the mosaics that decorate the walls of the cathedral converge.”

The twelve episodes of “Il Credo nei mosaici di Monreale," each of them half an hour long, will be broadcast every Sunday at 8:30 in the morning and replayed at 3:30 pm.

The first episode, on Sunday, April 21, will illustrate the first article of the profession of faith: “I believe in God, the Father almighty, creator of heaven and earth.”

But the program can also be seen via streaming all over the world, on the website of the channel.

by Sandro Magister
Posted by Unknown