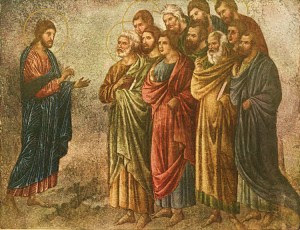 “Anyone who does not carry his cross and come after me cannot be my disciple.”

When Jesus started his ministry, a large crowd of followers were attracted by him, full of admiration for the great signs he showed.  When Jesus called Peter and his brother Andrew, his first disciples, they were amazed by the amount of fish they got in that miraculous event. The other two important figures among the Apostles were James and John, who also at one point wanted to sit next to Jesus on his right and left, and probably their mother wanted to have a nice place in the kingdom as well, due to her children. Moreover, the rich man wanted to follow Jesus, that is to say, to become a Christian, as a kind of second label as well as enjoying his comfortable and secure life.   Indeed, there are well known passages in the Gospels where apparently quite ordinary people become disciples of Jesus because it was good to be with Him, to see the wonders he did and, in addition, to attain a privileged place in the kingdom that they could enjoy.

So, why would Christ do that? Well, Jesus had come to a decisive point in his ministry. He put this process of becoming a disciple in a different and less romantic light because he expects his followers to be committed to him in such a way that they would reject all self-seeking and replace it with a disinterested love for others, for Christ’s sake. But he still goes further, saying that anyone who wants to be his disciple has to be prepared also to die, to be crucified as Jesus Himself will be crucified.  They had to prefer the will of God to any other more natural attachment. To love one’s mother, father, spouse, children and grandchildren certainly manifest the love of Christ Himself, but here we are called to prefer God, even to carry the cross and be crucified.  This is no easy and attractive way to be a disciple, but it is the only way.

So, what does it mean for us to follow Christ? What are the costs that we need to take into account? Today’s scripture is so challenging that, perhaps, it would help if we were to look at it in a new way.

It is not easy to follow Jesus and being detached from the ones you love, especially when they become an impediment to our following Him.  In other words, it is saying to us: “Don’t rush, think about it.” It is like planning to build a house or a tower. One needs to think about all aspects of the project, how much it is going to cost us to complete the plan.

To construct a Christian life is a more important and a more costing project than building a house.  So, think carefully what it implies to live that life.   Are you ready to pay what may be demanded of you, as the first apostles did?   After that first fishing experience, Peter never thought of dying on a cross like his Master. It never crossed James’ mind to be the first to die among the Apostles. It is what Paul in prison shows us in the second reading. He did not imagine that the encounter with Jesus in the light on the road to Damascus meant that he had to follow Christ even unto death.  So, Jesus is not asking for mere enthusiasm here, but for intelligence and realism and, above all, a generosity willing to give all. It implies commitment from the ones who genuinely want to be his disciples, as he found by the Sea of Galilee with Peter, James and John, and as he found in Paul on the road to Damascus.

The cost of being a Christian may be too high, and work may be too hard, because these words that Jesus addresses to us are harsh words to hear, but if we are going to be good disciples we need to act realistically about the situation in which we live, in order to build a life in Christ. This is the good news Christ brings. It is good news, because Jesus gives us an opportunity to do something great with our lives, to give our lives to something more important than ourselves. To turn our backs on cheap ways and avail ourselves of a costly grace, a grace full of meaning and depth.
Posted by Unknown