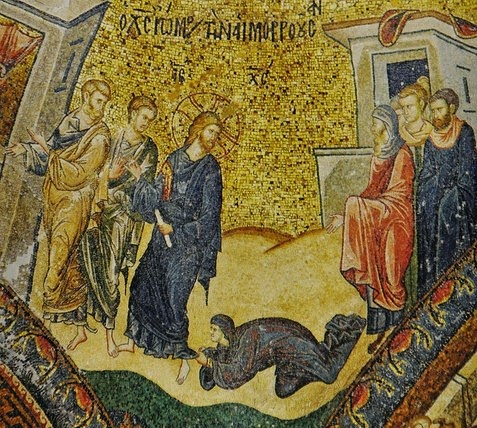 “Woman, you have great faith. Let your wish be granted”

We find in Jewish history a long tradition of exclusivity. The people of Israel were called to preserve the purity of their faith in the One God in the midst of many other nations with their gods. However, the Old Testament in certain passages, expresses the desire that other people, other nations, be drawn into God´s plan. Today’s first reading, taken from the third part of the Book of Isaiah, shows how God calls foreigners to his holy mountain and makes them joyful in the house of prayer he has established for all people. Thus, certain passages of Scripture reflect a universal understanding of God´s salvation.

This two-part vision is also found in the New Testament. The early followers of Christ hesitated as to whether their mission was to include the non-circumcised, the gentiles. The Church, in the figures of Peter and Paul realised that the call of Jesus to make disciples was addressed not only to the Jews but also to the gentiles.

Why do we call our faith ‘Catholic’? The word “Catholic” comes from the Greek kata (meaning 'according to') and olos (meaning 'the whole'). It means according to the totality. This composite Greek word tells us about the universal view of Christ´s message and effect. The Catholic faith is then for all the people.

In today´s gospel, Jesus at first seems to take the prevailing narrow view of salvation. As we just read, the Canaanite woman asked for the healing of her daughter and Jesus´ disciples asked him to respond, maybe by the simple fact that she was shouting after them. The woman's cry is one of profound faith in Jesus. Her request is simple. Her daughter is possessed by a demon. We can hardly begin to imagine just what this woman and her daughter must have suffered. This poor woman believes that Jesus can free her daughter from that terrible affliction. In her sincere and humble faith, Jesus said, “I was sent to the lost sheep of the House of Israel.” It seems a bit exclusivist one may say. However, Jesus had a more profound purpose. This turned out to be a strategy in order to let his followers be aware that that woman was capable of a faith greater than theirs.

What Jesus is doing is to offer this gift of faith to others. He pushed that woman in order that she might think more deeply and respond with her mind and heart to the challenge. She was indeed called to walk by faith. Peter was asked to walk on water; she was asked to move forward in her faith so that she may respond to Jesus´ call from something which was apparently seen as a rejection.
She got it. She was able to disclose God´s gift.  As St Paul in Romans today said, “God never takes back his gifts or revokes his choice.” He kept his promises to the people of Israel, but extended his gifts to others, to everyone.

Our Catholic faith by its name and nature calls us to embrace everyone in Christ. Jesus said, "Whoever welcomes one of these little children in my name welcomes me; and whoever welcomes me does not welcome me but the one who sent me." We are called to accept our neighbour as God´s gift to us, as God himself. As this Canaanite woman in the Gospel we are also challenged in our faith by God in order to grow, as the mustard seed. We sometimes may feel rejected, or forgotten by God by the situations in which we live. But we must remember that it is in this situation we find ourselves in that God pushes us forward. Our minds and hearts can be working together so we may ask Jesus, even for the scraps left for the dogs, even a bit of his mercy and love.

Remember that the scraps left to the dogs in this passage are connected with the passage of the multiplication of bread. Twelve full baskets of scraps were left. Scraps of God´s love and mercy for his people. So at this Mass let us pray that God may multiply our little faith and that we all may realise that He who called us always keeps his promise, the promise to love us and to be with us always to the end of time for all eternity.
Posted by Unknown