Israel's Motley Mosaics: A discovery of a fantastic ancient floor in the Negev 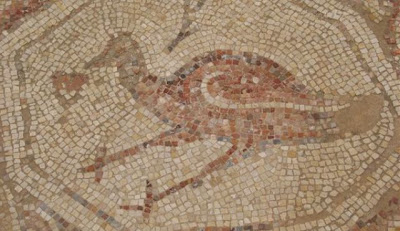 The discovery earlier this month of yet another spectacular mosaic floor in the Negev near Kibbutz Beit Kama is the opportunity to consider a “flying [mosaic] carpet”- themed itinerary. You can include stops at dozens of these marvellous, meticulous creations, some almost 16 centuries old.

The mosaics, most of which were installed in ancient churches and synagogues, told Bible stories, extolled donors, beautified the experience of faith and even educated people.

Most of these mosaics are brimming with human and animal figures, some fanciful, some realistic; some from Jewish tradition and some, like the pagan sun god Helios galloping across the sky, borrowed from other cultures. When the first synagogue mosaic in the country was discovered (now on display at Beit Alpha National Park) in the 1920's, scholars were amazed to discover that it was full of human and animal images – ostensibly prohibited by the Second Commandment. But scholars now tell us that Jewish thought of the day allowed such depictions – as long as they were not going to be worshipped, and that they are part of a tradition stretching across the region in the Byzantine period, which spanned the fourth–seventh centuries.

To catch several mosaics at once, visit the Inn of the Good Samaritan’s mosaic museum, where the Israel Nature and Parks Authority has also set up a shelter for pilgrims to hold mass at the site of a sixth-century church, including, of course, a mosaic floor. For individual mosaics, below are some of the most beautiful of the many colorful and intricate mosaics floors open to the public at sites you can weave into your itinerary: 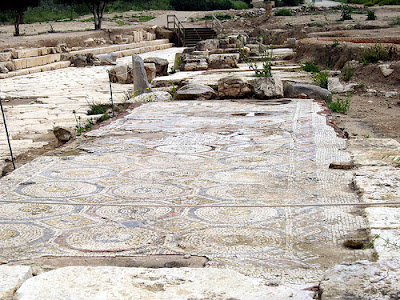 The church mosaic uncovered at Kibbutz Beit Kama is one of several all over the Negev, dating back to the time when Christian pilgrims crisscrossed that region. In the northern Negev, near Kibbutz Nirim (off of road 241 or 242) is another beautiful “stone carpet.” Restored by the Jewish National Fund, this sixth-century mosaic on the ancient site of Maon, like many ancient synagogue and church mosaics, features an inscription mentioning the names of the donors (some things never change) as well as intricate depictions of agricultural motifs such as grape-harvesting and brimming baskets of fruit, animal and birds. 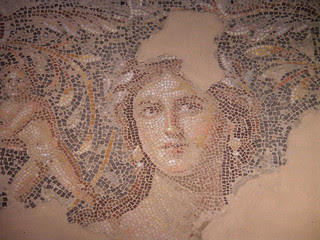 One of many stunning mosaics found in Tzippori

(To visit the first of these ever discovered, the sixth-century Shellal mosaic, will require a little more fuel than a trip to the Negev – after its discovery during World War I it was eventually taken to Canberra, Australia, where it is on display at the war museum there.) 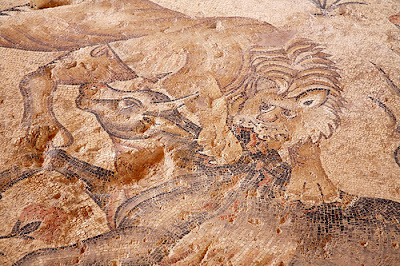 Birds are a common motif in mosaic floors, and in fact, have given their name to the Bird Mosaic of Caesarea. Some of them, like storks and pelicans, still cross Israel’s skies. Others are fanciful or humorous, road-runner style. Around them are wild animals and repeating geometric patterns that would put an Amish quilting bee to shame. The Bird Mosaic is clearly signposted, on the way to the aqueduct in Caesarea. It is special in that it is not from a church or a synagogue, but rather from a room in the villa of a wealthy Byzantine-era Caesarean.

Most mosaics are famed for the detail of their depictions of animals, plants and human figures. But the beauty of the mosaics at Mamshit National Park, which contains two churches, is in their simplicity. A rare depiction in Byzantine Christian art of a cross on the floor of the eastern churches reveals its antiquity, since after the 427 CE crosses were prohibited as floor decorations.

Other Christian artistic and religious symbols include fish, and peacocks which can be found on the mosaic floor of the Byzantine church at Horvat Midras, southwest of Jerusalem, not far from Beit Guvrin National Park. Ancient pilgrims apparently marked the tomb of the prophet Zechariah at the site. This magnificent mosaic was discovered in 2011 – “thanks” to an illegal dig by antiquities robbers.

Birds also appear in the mosaic floor of the ancient synagogue at Ein Gedi near the Dead Sea, whose dominant colors seem to mimic the surrounding desert scenery – shades of beige and brown, with green highlights, recalling the oasis home of the community that built it. Like other synagogues the mosaic reveals that the community was wealthy enough to pay the designer, the mosaic master and his extensive team – no small outlay, as you’ll learn at the charming audiovisual presentation at Beit Alfa National Park’s mosaic.

In the case of Ein Gedi, the wealth came from the cultivation of balsam, used in cosmetics and medicines. Because producing these products was so lucrative, it was apparently kept under close wraps. The long inscription in its synagogue mosaic brings down a curse on anyone who reveals the “secret” – presumably the coveted, eyes-only balsam recipe.

Some mosaic artisans outdid themselves in human depictions. Not everyone approved of such depictions, because some of them, like the sun god Helios or the signs of the Zodiac, were pagan or had been adapted by Christians. In fact, at one point in the history of the synagogue in Tiberias (Hamat Tverya National Park), the building was renovated, including a wall right across the beautiful floor, obviously to hide what some new building committee considered offensive.

At Beit Alfa National Park, discovered back in the 1920s, you’ll find an entire Bible story depicted in stone– the Binding of Isaac, right down to the altar, Abraham holding the knife, and a hand emerging from a cloud, with the first words of the fateful verse: “Lay not thy hand upon the lad” (Gen. 22:12).

Here and elsewhere people are amazed to find they can recognize some of the ancient Jewish symbols. Flanking the mosaic depiction of the doors of the Holy Ark is the seven-branched candelabrum, one of Judaism’s most enduring symbols, as well as a shofar, lulav and etrog. The only symbol most people can’t quite make out is the incense pan, which, like the candelabrum and the shofar, commemorated worship at the Jerusalem Temple, long destroyed by the time these mosaics were created.

At Tzippori National Park, you’ll find the mosaic-as-story reaching new heights. The Binding of Isaac is there, too, but alongside the sacrificial scene a remnant of the mother of the “offering” – Sarah – appears. The story continues up the mosaic to the Zodiac, where, as in many other synagogue mosaics, the names appear in Hebrew.

The four seasons are also shown, named and bearing their appropriate symbols, such as a bowl of grapes for summer or water for the rainy winter season. These were educational devices, scholars tell us, dating from a time when what some consider “merely” astrology today was a scientific pursuit. In the Tzippori mosaic, the design includes the symbol of the sun, often associated in Psalms with redemption, as well as the Temple symbols. The entire story reminded worshippers that redemption, first promised to Abraham, would shine like the sun, and the Temple would be rebuilt.

At Susya, in the southern Hebron Hills (reached from road 31 in the northern Negev) lies another synagogue floor replete with Jewish symbols. Here, too apparently the synagogue board decided to replace their Zodiac with a more “conservative” geometric pattern. The Bible story here depicts Daniel in the lion’s den.

Finally, the relatively simple mosaic at the Herodian Mansions in Jerusalem’s Jewish Quarter may be among the most poignant in Israel. It once decorated a Jewish home during the Second Temple period, when even King Herod observed the Jewish law proscribing human or animal images. What this mosaic with its simple geometric pattern lacks in color and designs compared to others, it makes up in the history it brings alive: on it are the charred remains of a wooden beam that fell from the mansion’s ceiling and burned itself to cinder on the floor, together with the rest of the magnificent Jewish homes of Jerusalem’s Upper City one month after the Temple’s destruction in 70 CE.